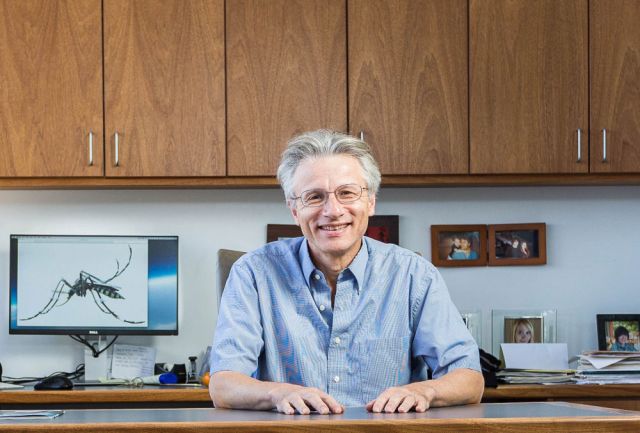 With advances in CRISPR/Cas9, the timing was right to begin working on Aedes aegypti, Montell said. Credit: Matt Perko

Mosquitoes are one of humanity’s greatest nemeses, estimated to spread infections to nearly 700 million people per year and cause more than one million deaths.

UC Santa Barbara Distinguished Professor Craig Montell has made a breakthrough in one technique for controlling populations of Aedes aegypti, a mosquito that transmits dengue, yellow fever, Zika and other viruses. The study, published in the Proceedings of the National Academy of Sciences, documents the first use of CRISPR/Cas9 gene editing to target a specific gene tied to fertility in male mosquitoes. The researchers were then able to discern how this mutation can suppress the fertility of female mosquitoes.

Montell and his coauthors were working to improve a vector-control practice called the sterile insect technique (SIT). To manage populations, scientists raise a lot of sterile male insects. They then release these males in numbers that overwhelm their wild counterparts. The idea is that females that mate with sterile males before finding a fertile one are themselves rendered infertile, thereby decreasing the size of the next generation. Repeating this technique several times has the potential to crash the population. What’s more, because each generation is smaller than the last, releasing a similar number of sterile males has a stronger effect over time.

SIT has proven effective in managing a number of agricultural pests, including the medfly (Mediterranean fruit fly), a major pest in California. It has also been attempted with A. aegypti mosquitoes, which originated in Africa, but have since become invasive across many parts of the world, due in no small part to climate change and global travel.

In the past, scientists used chemicals or radiation to sterilize male A. aegypti. “There are enough genes that affect fertility that just a random approach of blasting a large number of genes will cause the males to be infertile,” said Montell, the Duggan Professor of Molecular, Cellular, and Developmental Biology. However, the chemicals or radiation impacted the animals’ health to such an extent that they were less successful in mating with females, which undercuts the effectiveness of the sterile insect technique.

Montell figured there had to be a more targeted approach with less collateral damage. He and his colleagues, including co-first authors Jieyan Chen and Junjie Luo, set out to mutate a gene in mosquitoes that specifically caused male sterility without otherwise impacting the insects’ health. The best candidate they found was b2-tubulin (B2t); mutation of the related B2t gene in fruit flies is known to caused male sterility.

Using CRISPR/Cas9, the researchers knocked out B2t in male A. aegypti. They found that the mutant males produced no sperm, but unlike in previous efforts, the sterile studs were otherwise completely healthy. There was some debate over whether sperm — albeit defective sperm from the sterile males — was needed to render female mosquitoes infertile, or whether transfer of seminal fluid was all it took.

A detail from a color print of a female Aedes aegypti. Credit: Emil August Goeldi (1905)

In one experiment, the researchers introduced 15 mutant males into a group of 15 females for 24 hours. Then they swapped the B2t males for 15 wild-type males, and left them there. “Essentially, all of the females remained sterile,” Montell said. This confirmed that B2t males could suppress female fertility without producing sperm.

Next the team set out to determine how timing played into the effect. They exposed the females to mutant males for different lengths of time. The scientists noticed little difference after 30 minutes, but female fertility quickly dropped after that. Montell noted that females copulated twice on average even during the first 10 minutes. This indicated to him that females have to mate with many sterile males before being rendered infertile themselves.

Combining the females with the B2t males for four hours cut female fertility to 20% of normal levels. After eight hours the numbers began leveling out around 10%.

With the insights from the time trials, the team sought to approximate SIT under more natural conditions. They added different ratios of B2t and wild-type males at the same time to a population of 15 females for one week, and recorded female fertility. A ratio of about 5 or 6 sterile males to one wild-type male reduced female fertility by half. A ratio of 15 to 1 suppressed fertility to about 20%, where it leveled off.

Now, Aedes aegypti populations could easily bounce back from an 80% drop in fertility, Montell remarked. The success of SIT comes from subsequent, successive releases of sterile males, where each release will be more effective than the last as sterile males account for an ever-growing proportion of the population.

Montell plans to continue investigating mosquito mating behaviors and fertility. They are devising a way to maintain stocks of B2t males so they are only sterile in the wild and not in the lab. In addition, they are characterizing male mating behavior to uncover new ways to suppress mosquito populations.

“We’ve become very interested in studying many aspects of behavior in Aedes aegypti because these mosquitoes impact the health of so many people,” said Montell, who has conducted a lot of research using fruit flies in the past. “There is a pandemic every year from mosquito-borne diseases.”

“When CRISPR/Cas9 came out several years ago it just offered new opportunities to do things that you couldn’t do before,” he continued. “So, the time seemed right to for us to start working on Aedes aegypti.”