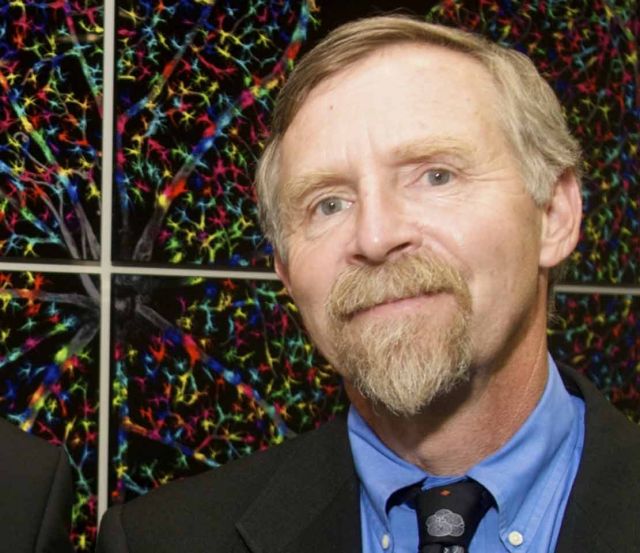 A retinal stem cell patch developed through a collaboration of researchers at UC Santa Barbara, University of Southern California and California Institute of Technology continues to make progress in its bid to secure approval from the Food and Drug Administration. The latest milestone? Results finding that after two years, not only can the implant survive, but also it does not elicit clinically detectable inflammation or signs of immune rejection, even without long-term immunosuppression.

“What really makes us excited is that there is some strong evidence to show that the cells are still there two years after implantation and they’re still functional,” said Mohamed Faynus, a graduate student researcher in the lab of stem cell biologist Dennis O. Clegg, and a co-author on a paper published in the journal Stem Cell Reports. “This is pretty important, because if the goal is to treat blindness, we want to make sure that the retinal pigment epithelium cells that we put in there are still doing the job they’re supposed to.”

A treatment in development since 2013, the California Project to Cure Blindness – Retinal Pigment Epithelium 1 (CPCB-RPE1) patch consists of a monolayer of human stem cell-derived RPE cells cultured on an ultrathin membrane of biologically inert parylene. The goal for this patch is to replace deteriorating cells in the retinas of those who have age-related macular degeneration, one of the leading causes of blindness worldwide for people over 50. The condition affects the macula — the part of the retina responsible for central vision. People with AMD experience distortions and loss of vision when looking straight ahead. 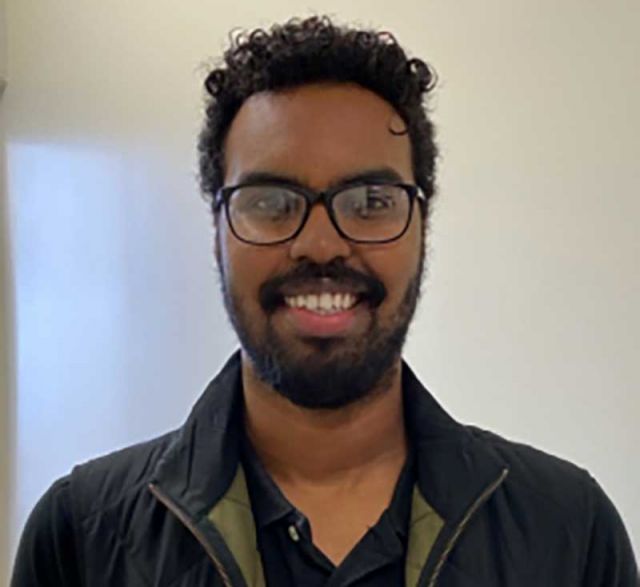 The researchers have made strides with the patch since its inception, guiding it through clinical trials for use with the dry form of AMD. If the implant works, the new cells should take up the functions of the old ones, and slow down or prevent further deterioration. In the best-case scenario, they could restore some lost vision.

The first sets of trials concentrated on establishing the safety of the patch and collecting any data on its effectiveness. The group, in a one-year follow-up published last year in the journal Translational Vision Science & Technology, concluded the outpatient procedure they were developing to implant the patch could be performed routinely and that the patch was well-tolerated in individuals with advanced dry AMD. Early results were promising: Of the 15 patients in the initial cohort, four demonstrated improved vision in the treated eye, while five experienced a stabilization of their vision. Visual acuity continued to decline in the remaining six, and the researchers are working to understand why.

Having implanted the patches in live volunteers, however, the researchers no longer had a direct means for assessing the patches’ function and any changes in the longer term.

“It’s a lot more difficult and complicated to do that a clinical trial setting,” Faynus said. “But we can figure things out by proxy if something is working. So for example, if a patient’s vision was getting worse and is now getting better, that’s worth noting.”

But the team had other questions that couldn’t necessarily be answered by proxy. Had the cells maintained their identity and thus, their function? Was the patch still in place and were the donor cells surviving? Were there any signs of immune rejection, a common and serious concern for any patient receiving an implant? If they could answer these questions, they would not only be able to take next steps with the patch, they would gain significant knowledge in general for the field of regenerative medicine.

Thanks to the generosity of one patient in the trials, the group would get their chance to find out. Named “Subject 125,” she passed away at the age of 84 from pneumonia two years after receiving the implant, leaving her eyes — and a rare opportunity for the team to check the progress of their patch.

“We are very grateful to the brave patients who volunteered in our clinical trial,” said Clegg, who holds the Wilcox Family Chair in Biomedicine. “Without them, we could not advance the science into what could be an effective therapy for millions of people.” 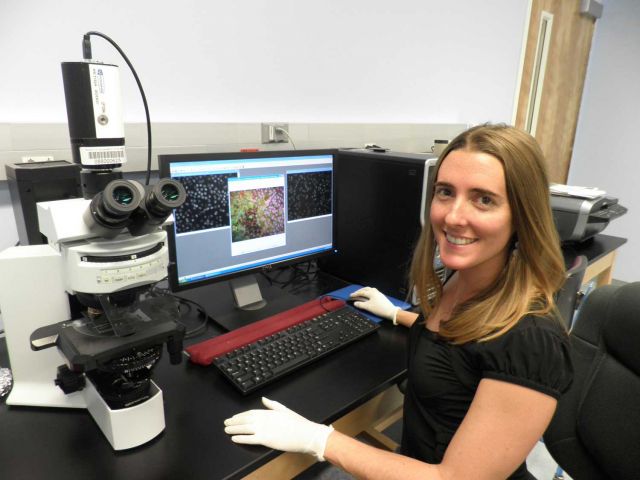 To address their questions, the team had to first identify the cells in the general area of the patch.

“Now that we had these sections of tissue, how do we demonstrate that the cells on the membrane were RPE cells?” Faynus said. “That was one of our key questions.” Beyond that, they had to identify whether the cells were from the donor or the recipient, and whether they were functional.

“The whole point of us implanting the cells was for them to perform the many functions that RPE cells do,” Faynus said. One of those functions in particular is the breakdown of debris and the recycling of vital cellular material.

“Every day you open your eyes, and light gets inside the eye, which triggers a whole cascade of events,” Faynus explained. “One of these being the shedding of photoreceptor outer segments.” Without the constant recycling of this material conducted by the RPE cells, he continued, it is thought that proteins and lipids accumulate, forming deposits called drusen, a hallmark of AMD.

In addition, the team found that after two years, the presence of the patch hadn’t triggered other conditions associated with implantation, such as the aggressive formation of new blood vessels or scar tissue that could cause a detachment of the retina. Importantly, they also found no clinical sign of the inflammation that can indicate an immune response to the foreign cells even after the patient was taken off immunosuppressants two months post-implantation.

“This is the first study of its kind and it indicates that the implanted RPE cells can survive and function, even in what could be a toxic environment of a diseased eye,” Clegg said.

Having passed the initial phase of trials, the team is now gearing up to begin Phase 2, which more specifically assesses the effectiveness of the patch. They have also made improvements to the shelf life of the patch, a technological advance they document in the journal Nature. In it, they describe a cryopreservation process that simplifies storage and transport of the cultured cells.

“Cryopreservation of the therapy significantly extends the product’s shelf-life and allows us to ship the implant on demand all over the world, thus making it more accessible to patients across the globe,” said Britney Pennington, a research scientist in the Clegg Lab, and lead author of the Nature paper.

Looking to the future, the Clegg Lab and colleagues are exploring combining multiple cell types on the patch.

“AMD progresses through several stages,” Faynus explained. When the RPE cells degenerate, he continued, the photoreceptors and varying other retinal cells that are supported by the RPE quickly follow suit. “To treat patients at varying stages of the disease, we need to consider the remaining cell types. If we can create composite implants that support many of the impacted cells, we can hopefully rescue a patient’s vision despite the severity of the disease.”